At the end of April we were honoured to welcome Professor Roland Renson on the VlaS secretariat. He's not only an Emeritus professor at KU Leuven, but also the president of Sportimonium

He helped us out by identifying some interesting organisations of traditional sports and games. His experience as an appreciated sport historian was very valuable.

As well Arunas Rinkevicius (Lithuanian sling shooter, living in Belgium) helped us out by calling to the Lithuanian ritinio Sport federation, a traditional hockey game.

Thanks for the help! 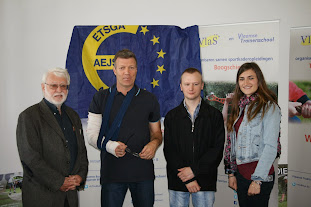